Opportunities of Floating Solar PV in Large Reservoirs in India

According to an article published by Financial Express in late 2019 [1], utilising only 10-15% of India’s water resources for floating solar plants could generate up to 300,000 MW of power. The results also demonstrate that FSPV plants have 10.2% more generating capacity than land-based PV systems and produces 28.38 mega units (known as MU – one million units of electricity) excess generation over the lifetime of the plant [2].

Generally speaking, putting solar panels on water bodies avoids land use conflicts and eliminates the need for major site preparations, such as leveling or the laying of foundations, which is a requirement for land-based solar installations. A schematic representation of a typical large-scale FSPV plant with its key components is shown below. 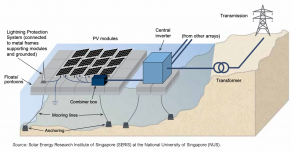 Ground mount solar projects require large land spaces in modern cities and as a result, lead to the escalation of land prices, which consequently increases the levelized tariff on electricity. FSPV plants not only boost PV efficiency due to the temperature-regulating effect of water and minimal shading, but the water bodies also benefit from reduced algae growth (sunlight radiation blocked) and evaporation. Reduced algae growth improves the overall biodiversity of the aquatic ecosystem by boosting the growth of sunlight dependent water plants and subsequent organisms that feed off it. Additionally, as algae growth is reduced, it minimizes the associated treatment and labour costs to maintain the water quality. FSPV plants have low environmental impact due to excavation work not being required, no impact on water quality and in fact, the floating plant helps to reduce erosion of reservoir embankments by reducing waves [3].

Globally, reservoirs are evaporating tremendous amounts of water into the atmosphere. The United Nations Environmental Program (UNEP) estimates that the evaporation from reservoirs surpasses both domestic and industrial water consumption. To put this into perspective, the 1MW FSPV plant installed at Kota barrage, in Rajasthan, India, saves up to 37 million liters of water by reducing evaporation and also brings down emissions by 1714 tons per annum[4]. Countries with similar climate patterns to India, where there are extreme and prolonged summers, can install FSPV plants not only for electrification purposes, but also to help preserve water levels and provide an important source of water supply for irrigation purposes and preserve wildlife ecology.

The deployment of floating solar is well positioned to accelerate in growth as the technologies continue to mature, opening up a new frontier in the global expansion of renewable energy. In 2018, Japan commissioned a 13.7 MW FSPV plant on a reservoir in the Chiba prefecture. The plant provides clean electricity to over 5000 households. In India, bids are being invited for a 50 MW FSPV plant over the water bodies in the southern state of Kerala. Collapsed coal mines in China that were flooded have turned their environmental and social disasters into an opportunity through installations of FSPV plants ranging from 20 MW to 150 MW per site. In this context, another opening would be the effective oversight and management of public spaces within close proximity to the reservoir/water body (where applicable) by the contractor, meaning dedicating a portion of the electricity being generated to subsidise management of public spaces. Furthermore, in the interest of prolonging the life and performance of the FSPV plant, contractors overseeing operations and maintenance of the plant will be incentivised to preserve the water quality, pollution levels of the water and security of the immediate neighbourhood. Reinforced security/CCTV around the boundaries will act as a deterrent to unwelcome behaviour. These actions assist in preserving fresh-water resources where the FSPV plant is in fresh-water reservoirs.

The return on investment of FSPV plants has been another catalyst for the rapid growth in FSPV capacity installation. Standardised equipment to ensure low production costs, competitive system prices and the savings realised on the land cost and yield cost results in the reduced levelized tariff of FSPV plants vs ground mount solar projects – approximately 39% less [5]. The higher initial capital expenditures of a floating system are balanced by a higher expected energy yield to a ground mount system. On a pretax basis, the levelized cost of electricity (LCOE) for a generic 50 MW FSPV system does not differ significantly from that of a ground mount system. Not just that, it does away with the need to source the depleting ground water for cleaning of solar panels. A combination of lower upfront costs coupled with minimal operational costs makes investments in FSPV projects an attractive option for investors looking to make long term investments in physical assets with strong, contracted cash flow profiles. The LCOE being achieved through the cost reductions helps investment/fund managers package attractive investment opportunities for investors, with returns ranging from 12-16% over 20 years. The diagram below provides an overview of the specific cost of FSPV projects below 3 MW across different countries, including India. 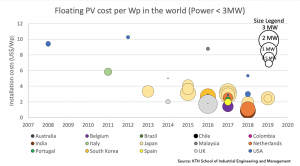 There are more than 400,000 square kilometers (km2) of man-made reservoirs in the world [6]. FSPV plants open up new opportunities for scaling up solar generating capacity, especially in countries with high population density and competing uses for available land. When combined with other demonstrated benefits such as higher energy yield, reduced evaporation, and improved water quality, floating solar is a likely option for many countries. There are a sufficient number of experienced suppliers available in the market to structure a competitive tender, and as additional costs appear to be low and falling rapidly, getting a commercial project financed and constructed is starting to make sense more and more economically.