I write this not long after the US Oil futures contract price was negative. Oil is trading at unprecedented low levels. Low prices are usually a curse for green energy, but this time may be different.

India happens to be the world’s third largest consumer of energy. Currently 5% of the world’s energy production is consumed in India. This consumption is expected to be 11% by 2040.

COVID-19 has already had a strong impact on global supply chains. In some ways the world has retracted from globalisation, making every country look more inward. Added with the fact that India imports 80% of its oil, 18% of its gas and 23% of its coal, India’s energy security is also under scrutiny. Of course, more than 200 million people do not have access to electricity in India, so this is not just about energy security but also about human rights.

The price of energy that most regulators and energy planners in the world monitor is the ‘Levelised Cost of Energy’ (LCOE). LCOE for Solar Photovoltaic (PV) is less than a tenth of what it was when crude oil traded low during the 08-09 recession. 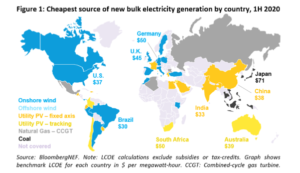 In fact, LCOE of Solar PV in India is the lowest around the world. According to a report from IRENA (International Renewable Energy Agency), the cost to deploy a Kilo Watt of Solar PV in India in 2018 was on average the lowest around the world. The same report also states that globally, onshore wind and solar deployment costs are now lower than fossil-fuel based energy sources. Effectively it is now cheaper to install new solar and wind projects than it is to install coal fired plants.

India has set an ambitious target of 175GW of renewable energy by 2022. As of February 2020, the installed renewable energy capacity is roughly 87 GW which is close to 50% of the proposed target.

In 2018, for the first time, we had more renewable capacity installed than thermal and traditional sources of power. But there is still a long way to go. Based on data published by the Central Electricity Authority, renewables including solar, large dams, etc. accounted for 21.2% of India’s energy mix in the last financial year (2019-20).

Relative to China on per capita electricity consumption, India is 4x behind; however, when it comes to generation capacity, India is nearly 5x behind. Chinese capacity grew 5x since 2001 on the back of thermal sources. India has the opportunity to write its own growth story with renewables over the next 20 years.

To solve energy security, we need provide power to those who need it and remove the burden from our environment. At the moment,India has a real opportunity to re-think and revamp its energy landscape. The Indian economy will soon need significant stimulus support revival. One of the best things we can do is to focus most of our energy stimulus on fast-tracking renewable energy.

Of course, renewable energy production cannot in its current form solve India’s energy mix requirements. If the stimulus is focused on innovation, energy storage and innovative financial models, it can certainly fast track the deployment of energy.

A lot of the deployment speed can come through financial innovation. For example, greater depreciation benefits for investors who choose to invest in renewable energy can lead to an increased investment in the sector. My own Distributed Energy is pooling Investors to invest in commercial and industrial renewable energy projects offering a win-win for both sides. Offering capital and incentives to the energy ecosystem for such innovations can stimulate a bustling renewable energy sector much faster.

I will be amiss if I don’t bring to light the large chink in the armor of Indian energy landscape, that is the financial solvency of a lot of the state energy distributors (or DISCOMs) and generators. From the known data, DISCOMs owe more than ₹25,000 Crore to the power generators.The solvency question also puts reliability and rates of electricity in question.

The Uday scheme launched in 2015 has attempted to force distributors to restructure their financials while accelerating renewable energy deployment. While the DISCOM losses have declined overall since the scheme launch, a lot of pending collection from consumers have made some state distributors more stressed. This is a major limitation in ensuring 24×7 energy supply.

This is a good time to take a hit across the board and create a focused approach to tackling the problem.A financial clean up act, technology and the right interventions can ensure that we continue to protect the interests of India’s most vulnerable while keeping an open door to the capital that is interested in scaling and innovating renewable energy.

India was on the right track before the COVID-19 outbreak. But we can really use the current situation as an opportunity to enable a very strong renewable growth curve and address India’s energy needs.

This article was originally published at: https://www.newworldorder.today/post/india-s-energy-options-after-covid-19