From the middle of this decade onwards, the ongoing cost reductions in solar PV have become more obvious to policy-makers, investors and incumbent energy companies. This has engendered a new environment in which the growing importance of low-cost renewables is widely recognized. At the same time, solar projects have sprung up in an increasing number of countries, notably in the developing world. New methods of integrating their variable generating output have emerged, including more flexible grids and the deployment of batteries and other forms of energy storage. 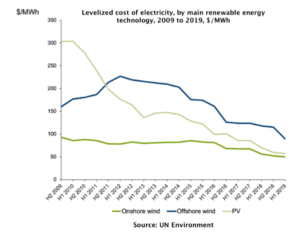 In the context of solar, IRR can help you understand the rate of growth that you can expect from your investment in a solar power system. IRR is one of the important parameters which can be used to compare and set a benchmark for measuring returns for alternative projects.

Two key factors affecting the internal rate of return of your solar investment are:

Other factors that directly and indirectly affect a solar rooftop projects IRR are instances where government bodies on national and local levels together with some utilities have launched policies and financial incentives of support for photovoltaic systems. Policies that promote financial incentives such as feed-in tariff, net-metering, green pricing, low interest loans and capital subsidy all add to creating a cost competitive environment that promotes the deployment of solar rooftop projects in a country. 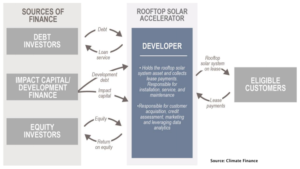 Hence, it goes without saying, that based on the region of solar installation, a culmination of the above factors, including the type of financing schemes available, will affect a projects IRR. Consequently, this has given rise to various rooftop solar accelerator instrument mechanics.

Take for example the solar industry in India. On average, the cost per kW for a 100-kW solar rooftop installation for commercial/industrial customers is $580, which equates to $58,000 for the system. Assuming a solar tariff rate of $0.07 per kWh, you can expect an IRR above 16%, unleveraged. If leveraged at 30:70, the IRR will surge over 23%. However, even between states in India, the overall cost of the solar project will vary as a result of various state-sanctioned fees and soft costs. Furthermore, each state-owned utility company responsible for electrical power generation, transmission and distribution have varying tariff rates. This can significantly impact and limit the solar tariff rate offerings and consequently, the IRR for PPA-led solar project models. Having said that, over the last decade, the return potential of solar rooftop investments has been on the rise and based on the projected global investments in solar energy capacity, will continue to do so for the next 5-10 years at least.

A pair of decades ago, solar photovoltaic panels were an experimental technology, with extremely high costs and zero business potential. Now, on the other hand, as a result of technological advancements, funding sources from local government and banks, economies of scale, tax incentives and lower soft costs, the popularity and rise of rooftop solar is apparent and there is little doubt that solar energy has a place in the future of the worlds electricity generation.

Click here if you want our team to get in touch and help you invest in solar in the developing world.

Invest in this Project