Overview of Renewable Energy Plan and performance in Maharashtra

In line with the Paris Agreement, the Government of Maharashtra has committed to achieving 40% of its electricity generation from renewable energy sources by 2030. In India, Maharashtra has the third-largest solar power generation potential, followed by Rajasthan, Jammu, and Kashmir. According to reports published by the National Institute of Solar Energy (NISE), its aggregate solar power potential capacity is 64.32 GW.

As per the report of the Institute of Energy Economics and Financial Analysis (IEEFA), Maharashtra had an installed renewable energy capacity of 9.7 GW in June 2020. Out of this, 1.6 GW constitutes operational solar projects and about 1.2 GW is currently under development. The state ranks fourth when it comes to rooftop solar installations in India, representing 9% of the total installed capacity.

It has been observed that Maharashtra is one of the few states in India that continues to have a very high electricity grid tariff, especially commercial customers. The current commercial tariff in Maharashtra is 12.04 INR/unit which, when compared to other states, is absurdly high. As of  January 2020, Maharashtra was listed at the very top among a list of states with the highest Domestic tariff. 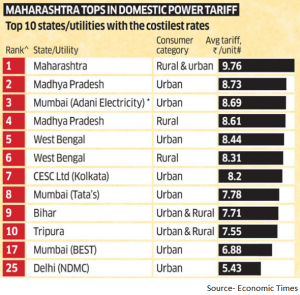 As a result of the high tariff rates set by the grid, consumers in Maharashtra are in favor of adopting renewable sources of power which are cheaper and more reliable, not to mention cleaner. The Government of Maharashtra has been very proactive in promoting the deployment of renewable energy technology within the state. Some of the key policies established by the state government favoring renewable energy adoption are:

The main focus of the policy is to fulfill renewable energy capacity goals in the state. It has emphasised the development of hybrid and distributed solar projects. The state has also provided various incentives such as exemption of electricity duty and capital subsidy for selected technologies under this policy.

The government has planned to deploy 1 lakh off-grid solar-powered agriculture pumps in phases under the “Mukhyamantri Saur Krushi Pump Yojana” scheme. The main agenda of this scheme is to-

After facing criticism for releasing the draft policy to withdraw net-metering facilities and benefits for commercial and industrial (C&I) consumers, the state issued new regulations for net metering in 2019. This new regulation allows net metering benefits across all categories, including C&I consumers. It also stated that the maximum solar load allowed on a distribution transformer would be increased from 40% to 70%.

With the current trends favoring renewable energy, and constructive measures taken by the government, the solar industry and developers like Distributed Energy are optimistic about achieving the target of installing 12.93 GW of solar projects by 2025. However, the solar developers would like to see the following regulatory changes to accelerate renewable energy adoption in the state:

Synchronized efforts of the state government and energy developers will promote private participation in the adoption and funding of solar projects, leading the state towards achieving the set targets.