Present and Future Scope of Renewable Energy in Developing Countries

A recent report published by Bloomberg New Energy Finance (BNEF) stated that developing countries are more inclined to transitioning towards clean energy sources compared to developed countries. By 2050, nearly 85 percent of global energy generation is projected to come from renewable energy (IRENA, 2018). Fortunately, most developing countries have abundant renewable energy generation potential, including the likes of solar energy, wind power, geothermal energy, and biomass. This coupled with their ability to manufacture the relatively labor-intensive systems at very competitive prices puts them in a unique position to lead the clean energy transition.

At present, much of the movements in this spectrum are led by the likes of China and India. These developing economies are the drivers behind the growth in the solar capacity we’ve been witnessing, which expanded by 40% in 2019. The International Energy Agency (IEA) has indicated that between 2020 and 2025, solar power is on a trend to becoming a cheaper source of power than fossil fuel-based sources such as coal among several developing countries, including India and China. India plans to generate 100 Giga Watts (GW) of power using solar panels by 2022. According to the Council on Energy, Environment and Water and the Natural Resources Defense Council India, this growth will create an estimated 330,000 jobs in the field of solar. Other developing countries, such as Bangladesh, are also turning towards small-scale solar power in order to improve their access to energy and the overall energy mix of the nation as a means to improve its energy resiliency. The nation now has the largest off-grid energy program in the world, connecting about 5.2 million households to solar power every year, roughly 12 percent of the country’s population. Another notable mention is Rwanda, which is an effort to combat its poverty and provide basic electricity as a means to improve business activity, received a Strategic Climate Fund Scaling up Renewable Energy Program Grant of $21.4 million in 2017 to bring off-grid electricity to villages across the nation. Brazil has introduced innovative schemes to improve the overall competitiveness in the energy landscape by promoting an energy auction system for converting their energy sources (mainly fossil fuel-based) over to renewable energy. Contracts are distributed to the lowest bidding developer with a goal of operation by the end of the sixth year. Brazilian agency Empresa de Pesquisa Energetica (EPE) auctioned off 100.8 GW worth of energy on September 26, 2019.

Appropriate investments in renewable energy are a catalyst for not only facilitating a clean energy transition among developing countries but also in providing adequate energy services to populations that are currently deprived of a fundamental right. Growth in the renewable energy sector will create jobs and also improve the nation’s energy infrastructure, which consequently, will help to alleviate poverty within their societies and improve the overall standard of living. Various developers like Distributed Energy are offering special investment platforms for investing in renewable energy projects in India, Middle East, and East Africa. Our development world-centric approach to making investment decisions is a conscious choice because these are regions where access to capital is low and where we can help investors create the greatest impact with their capital.

According to the World Economic Forum’s 2019 Energy Transition Index (ETI), various emerging and developing Asian countries have earned a place under the list of top 100 countries for conventional to the non-conventional energy transition. The ETI provides a framework that has defined (i) security and access; (ii) environmental sustainability and; (iii) economic development and growth, as the three pillars that can help foster the next energy transition. 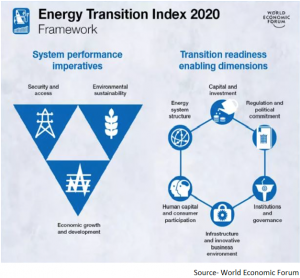 The ETI is a fact-based ranking intended to enable policymakers and businesses to plot the course for a successful energy transition. The energy transition refers to the global energy sector’s shift from traditional, fossil fuel-based systems of energy production and consumption as well as the trends in the penetration of renewable energy into the energy supply mix. India for example is one of the few countries in the world to have made consistent year-on-year progress since 2015 and the nation’s improvements have come across all three dimensions of the ETI framework. The renewable power generation systems in many developing countries need to be significantly cheaper in order to justify transitioning away from existing investments, especially those that are still in effect as a result of long-term financing arrangements.

It is up to the government bodies, combined with the support of the public/private sector in developing countries, to continue building on their existing frameworks and provide the necessary incentives designed to encourage the development and deployment of renewable energy sources.