Kerala released its Solar Energy Policy in 2013 with a mission to increase the installed capacity of solar to 500 MW by 2017 and 2,500 MW by 2030. As of March 2019, the total installed capacity of solar in the state is 134 MW. To achieve the above set targets, the Kerala government needs to boost up the reforms for the solar installations. Recently, the Kerala State Electricity Regulatory Commission (KSERC) issued a regulation called the “Kerala State Electricity Regulatory Commission (Renewable Energy and Net Metering) Regulations”, 2020”. According to this regulation, the state-directed distribution licensees to constitute an in-house renewable energy cell to promote the deployment of renewable energy projects in the state. The new regulation says that the state will also penalize distribution licensees if they cannot stick to the timelines prescribed by the Commission.

The Kerala Government has also launched a program called “Soura”, which aims to add 1,000 MW of solar projects to the existing capacity of Kerala State Electricity Board Limited (KSEBL) by 2022. Of the 1,000 MW, 500 MW will be from rooftop solar, 200 MW from ground-mounted solar, 100 MW from floating solar, 150 MW from the solar park, and 50 MW from canal top solar projects. To promote and realize the rooftop solar targets, KSERC directed the distribution licensees to provide net metering arrangements to prosumers on a non-discriminatory and “first come, first serve” basis within 10 days from the date of submission of the approval of the renewable project from an electrical inspector. Also, the prosumer will be exempted from the payment of transmission and wheeling charges and cross-subsidy surcharges for the electricity generated and consumed under the net metering facility.

Distribution licensees, captive consumers, and open access consumers in the state will have an obligation to either generate or purchase the percentage of the total consumption from renewable energy projects as a part of their renewable purchase obligation (RPO).

Projected Energy Consumption for the 10 years for Kerala (in MU)- 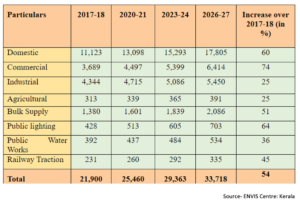 The major consumption rise is in commercial sectors. Generally, commercial and industrial (C&I)  consumers pay comparatively higher tariff rates than other types of consumers i.e. 6.3 Rs/unit for commercial and 5.75 Rs/unit for industrial in Kerala. Hence, many C&I consumers are trying to switch towards solar PV installations as a means to reduce their electricity expenditure and utilize their available roof space.

KSERC also supports the concept of third party (OPEX) models for rooftop solar. This is encouraging solar companies like Distributed Energy to offer attractive Power Purchase Agreement (PPA) options to consumers with no capital investment. Consumers will benefit from cheaper electricity rates than what the grid is currently offering (minimum 15% reduction), no capital expenditure from the consumer’s side, and utilize energy from a clean and environmentally-friendly source.

As per the current net metering regulations, rooftop solar systems installed by a prosumer at his premises with net metering should not be less than 1 kW or exceed 1 MW capacity. Limiting the size up to 1MW for net metering can in many instances lead to the partial installment of rooftop solar PV instead of meeting the full requirement of the consumer. This can be a bottleneck for meeting solar deployment targets in the state. Additionally, Kerala is a relatively smaller state compared to its neighbors – with fewer open land availability for utility-scale solar projects. Hence, the state needs to focus on rooftop solar PV reforms to encourage solar installations.

Overall, the key takeaways are that Kerala has a good scope of rooftop solar deployments in the C&I sector. The recent mandates expected from KSERC to DISCOM and the availability of net metering favor the customers to choose solar PV solutions. This shows the willingness of the state to achieve its set targets of energy production from solar and renewable energy as a whole.