Renewable energy and climate change are topics that are gaining importance among Governments and businesses in India. As regulations and adoption rates vary vastly between different states, we need to educate ourselves with the current trends, regulations, and developments to be able to contribute efficiently. Tamil Nadu has always been at the forefront of promoting renewable energy. The state operates with the most diversified electricity generation portfolio in India. As per October 2020 data from Tamil Nadu Energy Development Agency (TEDA), the state was consuming thermal and renewable energy in equal ratios. 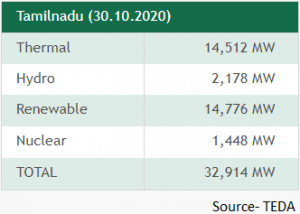 The Government of Tamil Nadu is committed to mitigating the climate change effects by enforcing policies to encourage solar energy projects in the State. They have launched Solar Powered Green House Scheme. This scheme included the construction of 3 lakh houses with solar-powered lighting systems over a period of 5 years from 2011-12 to 2015-16 for the benefit of the poor in rural areas. Additionally, the state proposed to energize 1 lakh street lights in village panchayats through solar power over a period of 5 years up to 2016. Tamil Nadu has achieved 3915.88 MW of cumulative solar PV capacity by the end of February 2020. It was the sixth largest in roof-top solar installations with a capacity of 155.99 MW. The state has a 648 MW utility scale project named Kamuthi Solar Power Project which is one of the top 10 solar projects in India.

In addition to this, TNERC has released its latest Solar Policy in 2019. The policy aims to achieve 9000 MW of installed solar capacity by 2023 between utility-scale and distributed generation projects. 40% of this target i.e. 3600MW is expected from the residential rooftop and small-scale solar installations.

Despite the proactive steps being taken towards solar energy adoption, it has become increasingly evident that over the last 2 years TNERC is not able to reach its yearly targets. This is principally a result of the change in the grid feed-in mechanisms being introduced in the new solar policy. There are two main mechanisms: gross feed-in and net feed-in. As per the new policy, the net feed-in mechanism is only allowed to low tension consumer categories. TNERC had determined a net feed-in tariff (unit rate for net exported energy after self-consumption) at ₹2.28 per unit and gross feed-in tariff (unit rate for selling all the energy produced by the solar panel to the utility) at ₹3.04 per unit. As the charges being paid by the grid for exported units by the customer are cheaper than the grid tariff being paid by commercial & industrial consumers for imported units, there have been reservations in adopting solar power.

Tamil Nadu can achieve its targets of installed solar capacity by focusing on solar rooftop projects. Association of the Tamil Nadu Electricity Board, a 1-MW panel in Tamil Nadu produces 1.5 MU per year on average. This conversion is based on factors like the time of energy generation in a day and production efficiency influenced by seasons.  A 1-kW rooftop panel requires about 100 sq. ft. As per the state data, there are 2,392,457 buildings in town panchayats alone. Considering the total area of all rooftops in the state’s urban centers and assuming all roofs will generate 10 W/sq. ft. solar powers, the state should easily be able to reach the set targets. Through developers like Distributed Energy, the state can leverage its untapped markets by utilizing their field expertise and investment support to aggressively deploy solar projects and meet their state targets moving forward

Tamil Nadu is closer to becoming a self-sufficient state considering its solar potential.  However, long standing policies, regulatory and administrative hurdles can become a hindrance to achieving its renewable energy goals.  With adequate steps to untap energy-intensive commercial customers and policy decisions to support renewables, the state can see a positive change and move towards net zero emission in the near future.