Andhra Pradesh is the second largest clean energy producer in India. The state currently contributes to 10% of India’s renewable energy production with a total capacity of 8,220MW. At present, the state has installed more than 3,500MW of solar power plants. Even during the midst of the pandemic, the state has commissioned 229MW of solar power plants.

On July 7, 2020, the Andhra Pradesh government formulated the new regulations called the “Andhra Pradesh renewable energy export policy, 2020” to effectively utilize the free suitable lands and to promote and develop renewable energy projects for the purpose of energy export outside the state. The policy is applicable for solar, wind, and solar-wind hybrid systems and the policy will be in effect for 5 years starting from July 17, 2020.

In addition to the export project, the Andhra Pradesh government has announced a 10,000MW project. According to AP Green Energy Corporation Ltd (APGECL), this project will help cope with the projected demand for power in the next three years. Andhra Pradesh government also has planned to provide the state’s agriculture sector free power through this project. As per APGECL, the power demand in the coming years could be higher than the proposed 10GW project with 50,000 new agricultural connections being added every year. The agricultural sector in Andhra Pradesh accounts for 24% of the total energy consumption of the state. This initiative can help meet the growing demand and at the same time make the agricultural load completely reliant on solar power. The table below shows the expected peak demand for the years ahead. 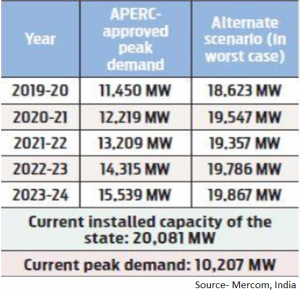 In January 2019, the Andhra Pradesh government released a new solar policy to promote the usage of solar power in the state. The government set a target of 5GW in the next five years. Solar rooftop installations up to 1000kW will be permitted at a single location.  According to the policy, the consumers are free to choose either net or gross metering options for the sale of power to Distribution companies (DISCOMS).

This policy is about to have some changes as DISCOMS suggested removing the net metering option as it is not beneficial. It also suggested reducing the contract period to 10 years from 25 years. As a result, large developers may overlook small scale rooftop projects. But developers such as Distributed Energy inject life into these projects by leveraging finance, innovation, and technology thereby bridging the gap in funding for renewable energy. At present, the commercial and industrial tariff rate stands at Rs. 10.15 and Rs.6.7.

Despite being an energy surplus state, Andhra Pradesh has come up with ways to steadily promote solar. The new export policy will help add revenue to the state and at the same time help other states which struggle to cope with its power demands. The 10GW will pave way for further investments to shift more sectors towards clean energy. With the upcoming changes in the solar rooftop regulations, the solar rooftop segment will face a notable change in the next few years.