The term “low carbon economy” was coined in 2003 and published in a report for the British Department for Trade and Industry. The report urged countries all around the world to prioritize and establish modes of production and consumption patterns corresponding to a low carbon economy i.e. low energy consumption and low pollution by engineering technology with low carbon emission over the whole process of production, use and waste. Later in 2005, during the Davos World Economic Forum, former British Prime Minister Tony Blair reiterated the same message, urging nations to set up domestic and international policies, a legal system, and the market mechanism to encourage a low carbon economy.

Fast forward to 2020, and climate change has already had observable effects on our environment. Glaciers all around the world have shrunk, plant and animal ranges have shifted, accelerated sea level rise and more intense heat waves. According to the latest report published by the Intergovernmental Panel on Climate Change (IPCC), the net damage cost of climate change is likely to be significant and to increase over time. 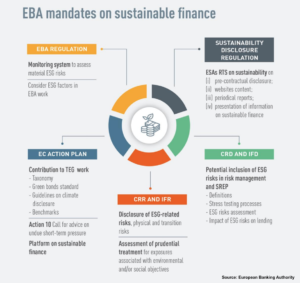 The European Union (EU) has already drawn up a comprehensive strategy on sustainable finance through the European Banking Authority (EBA).

Members of the EU, notably Sweden, Germany, Switzerland and Austria have made tremendous strides in propelling their national green performance by focusing on innovation, green branding and carbon efficiency. These countries have extensively focused on promoting initiatives in the following areas:

Access to capital for stimulating renewable energy deployments has been a challenge in the past and continues to be a bottleneck, especially in developing countries. Now, more than ever, the need to mobilize innovative financial products and services through financial regulators such as central banks can be a catalyst for motivating banks to provide environmental-friendly projects with easier access to capital. Take the example of Malaysia, wherein the Government initiated the Green Technology Financing Scheme (GTFS) that resulted in the participation of 28 banks and financial institutions in 319 green projects (around $875 million in loans) as of 2018.

Using loan finance to fund clean energy infrastructure is not new. In December 2018, in an effort to standardize the industry framework to finance projects that provide clear environmental benefits, the Loan Market Association modelled the Green Loan Principles (GLPs). Applying a globally consistent methodology, such as the GLP, has undeniably increased transparency in project selection, fund allocation and reporting. This has helped financial institutions track the green share of their lending portfolio. More importantly, it provides better clarity for these institutions in terms of redirecting capital flows to meet sustainability targets, and even consider divesting in assets that are seen as exacerbating the impacts of climate change. Like the GLP, there are many other types of loans gaining traction, such as the Sustainability-Linked Loan, also known as the Positive Incentive Loan or ESG-Linked Loan.

Given our emphasis on clean energy deployments in developing countries, we too, have been exposed to the limitations of the existing financial structures and policies. We’ve gone to the extent of raising awareness of renewable energy schemes at a policy-level and in the process have been able to drive forward our financial vision and implementation of portfolios consisting of clean energy projects for our investors.

To keep global warming below the 2°C target agreed in the Paris Agreement will require a sharp ramp up in investments into lower and zero-carbon energy sources. It will also mean a much-needed transition among regions with carbon intensive assets which also happen to be major component of the local economy. Having said that, a transition to a low carbon economy can equally transform the economic activity and revitalize a region through new and better employment conditions and skill development. For this trade-off to be realized, there needs to be a shared understanding of the types and levels of trade-offs that are acceptable for all stakeholders.